This is Brianne coming to you live and direct!

So very many things have been on the go for me in the last few months.

My project The Dangers of Online Dating (DOOD), which I am directing and created, and co-wrote alongside Benjamin Larose, made it to the Top 40 of the Cinecoup Film Accelerator (a mould breaking method of financing) and was consistently in the Top 10 in the polls week to week. You can find out more about who the team is, where the idea cam from and why DOOD is relevant by watching the “Mission” videos we created each week. Although we are no longer in the running with Cinecoup, The Dangers of Online Dating is not dead. My producer throughout the Cinecoup process is Digital Media Producer Corey Tracey at Rival Schools and we are working full steam ahead with exciting possibilities on the horizon. Follow DOOD on Facebook, Twitter, Instagram – It’s totally worth it. I’ve been taking pictures of DOOD buttons on everybody’s chests.

In December I pitched a short film, Cougars Cruising, at the Whistler Film Festival. Cougars Cruising is an adventure comedy that follows three lively, enchanting, and passionate 70 year old women determined to unlock the key of sexual pleasure in their Golden years. Produced by Lianna Walden (Citizen Marc) and Kelvin Redvers (The Dancing Cop, CTV First Story), and edited by Lara Mazur (Arctic Air, Hiccups), this is an all-star team. But… I didn’t get that award either. It was bitter sweet as I was told I didn’t need another short film and that this should be a feature film. So that is where it is headed. First we will make the short with an amazing cast which includes award winning actresses Yvonne Adalian, Mary Black, and Gina Stockdale. It looks like we will be in production this summer. When I get a breather, the feature is next. 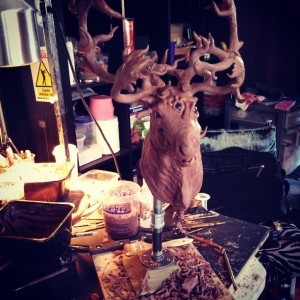 The other monstrosity of a short film is With Cold Tongues, (formerly titled Uranium) which is based on Dogrib Author Richard Van Camp’s short story, The Uranium Leaking From Port Radium and Rayrock Mines is Killing Us. Production on this will take place in Canada’s Northwest Territories in the Yellowknife area. Our producers include Pablo Saravanja and Jay Bulchaert of ArtLeSS Collective, and a new edition, Lesley Johnson. We have a stellar props designer/builder and Special Effects make up magician, Matthew Aebig, who is building us a life size zombie caribou, and creating this post apocalyptic world. Production and release date are TBA but you can keep updated on Facebook.

In October, I co-wrote and edited Kryshan Randel’s latest short film, Seasick, as part of the Bloodshots Canada 48 Hour Horror Filmmaking Competition, a competition that I won with Andy Thompson in 2010 for our short The Provider. In the next three weeks I will be going back to perfect our hasty 10 hour edit and get it ready for the horror film circuit which so loves Mr. Randel’s work. He has a cult following you know.

In other news, I wrote a feature film. Boy is that a crazy thing to say. The film is still in development, and is being produced by Genie Nominated producer, and one of the most awesome women I know, Amy Belling. We were shortlisted for the Telefilm Micro Budget Feature Film Award, and had been nominated by Cineworks, but we were not a finalist. Writing is re-writing and that is where we are at with it right now.

I have also been offered a position writing and editing an independent documentary TV series. Details on that will follow when all is confirmed.

This could be a very full summer in production. Or it may not be. Either way I will be writing lots, enjoying life, and working my butt off to better myself as a writer and a director.

Do you have something you want to pay me to direct, write or edit? CONTACT ME.