Leave a comment
in development, sex with paula, television, the dangers of online dating

The cast (and some crew!) at the launch party and screening of “The Dangers of Online Dating” in Vancouver, BC at The Penthouse November 23, 2017. (L to R: Stacy Mahieux, Paula Burrows, Brianne Nord-Stewart (creator/writer/director), Peter New, Byron Noble, Natalie Catherine, Sierra Pitkin)

To whomever is reading this, thank you for taking the time!

Whether you’re here to (fingers crossed) vet me for a job, check out some of my award-winning work (😉), or maybe we’ve gone on or about to go on a date and you’re cyber stalking me (well done, but please stop) thanks a million for hanging out long enough to read this sentence.

The last year was really all about getting my original digital series, THE DANGERS OF ONLINE DATING, written, produced, edited, delivered, and finally, launched into the ether that is the internet. Wow.

Well, I did it. The show is out (WATCH IT). Ready to be consumed (WATCH IT). It’s done (Did I mention you should WATCH IT). And I have already started releasing the companion sex education series, “SEX, With Paula“. There are 9 episodes of #DOODtheseries (WATCH IT)(use this hashtag!) and soon to be 9 episodes of #SEXwithPaula (this one too!) out as well, AND we’re going to continue releasing new episodes of the latter until we cannot possibly anymore.

There are a few people that I absolutely need to thank.

First to the cast and crew of season one, which we started filming in 2012 (yes, really). To Paula, Stacy, and Byron, thank you so much for coming on board back then, and for still being committed 5 years and 2 provinces later! To our very tiny and committed crew, thank you for your countless (or few) volunteer hours on what was this little idea I had.

And then to Telus Optik and the Storyhive team. There in all likelihood would not be a season 2 without you. And definitely not a season 2 like this. And to Creative BC for that little bit extra. So…THANK YOU FOR ALL THE 💰 💰 💰💰 !

To the season 2 team…Season 2 was achieved with a great many more people, more crew, more cast, more locations – more everything – and all of those logistics were being planned and re-planned by my line producer James Hutchison. He’s the shit. (Don’t even think about poaching him.) To the new cast who came in and have been all about the show, I THANK YOU!

So what am I doing next? The question of the day, month, year, hour, minute, second…

Well, today I did some life stuff and laid on the couch and watched “Julie & Julia” because I needed Nora Ephron’s magic, and was subsequently inspired to write a new blog post (the film is about a writer writing a blog…)

Next up is re-writing a half hour pilot for THE DANGERS OF ONLINE DATING, re-writing my feature, writing a one-hour original, and pitching other web/series content that that I’ve been developing with other writers. I want to direct my first feature, and then my second. I want to get that first episodic gig, and then my second. And then I’m sailing.

Literally. I’m getting on a boat and sailing around the Cook Islands.

So please, watch the freaking show. 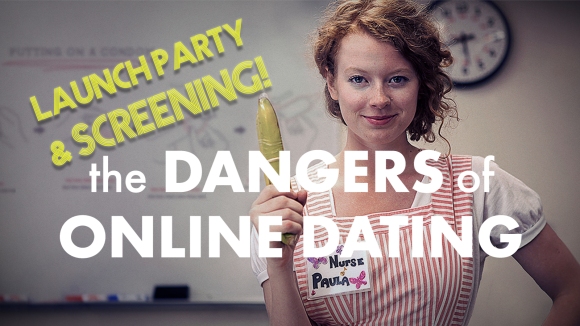 Honestly, so much press talk. Not sure where to start with this other than THE DANGERS OF ONLINE DATING launch day is tomorrow!

If you’re reading this on or before November 23rd, 2017, you can get your tickets to the Vancouver launch & screening by clicking HERE.

It it’s after November 23rd *tear* you can start checking out the weekly release of episodes on the brand spanking new YouTube channel by clicking HERE. Remember to click SUBSCRIBE!

Press links will come soon, but in the meantime here is THE DANGERS OF ONLINE DATING on the Vancouver Sun cover, and a picture of me with host Cory Price at Roundhouse Radio 98.3 earlier this afternoon. We closed out the interview by playing “Little Death” by the local Vancouver band, IMUR. Take a listen to that track and the whole album!.