Beat Around the Bush wins Best Comedy Short at AZIFF

It’s true. As Una would say, “Don’t get your knickers in a twist”.

On my first day back in Vancouver after Arizona and Newport wrapped, while sipping cheap wine (that I bought) on a 112ft yacht (that some lovely but unsuspecting person let me on to), I found out that Beat Around the Bush won Best Comedy Short from the fine folks at the Arizona International Film Festival. But first the backstory:

On April 23rd, after driving 9 hours from the Newport Beach Film Festival in California to my screening of Beat Around the Bush at the Arizona International Film Festival in Tucson, I was pleasantly surprised to feel right at home. 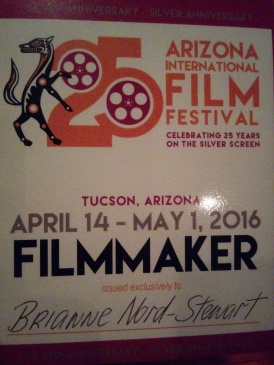 Filmmaker Pass speaks for itself!

The screening was fantastic, laughter all throughout the theatre and and the post screening drinks with filmmakers and watchers alike was also a real treat. I’ve been to a lot of festivals and Tucson had an immediate “home” feeling to it.

I was back on the road back to Orange County not 18 hours after I arrived, and was given a fantastic farewell at a delicious brunch I wasn’t planning to stay 15 minutes at, and stayed 2 hours.

I look forward to making it back. Until next time!